Shown in Canberra, Sydney, Toronto Canada, Washington DC, France, Noumea, Japan & Germany, to mention a few. Furthermore she has held eleven solo exhibitions, three of which have been at the Holdsworth Galleries in Paddington, Sydney.

Philippa’s works hang in private collections both here in Australia and overseas. She has many commissions to her credit, including paintings on linen and paper, logo designs, a wall sculpture, and glass paintings.

Philippa Stewart-Hall’s foray into the art world began when she had an accident in 1975, which caused her to rethink her life. Her work came to the notice of the artist Ross Morrow, who became her mentor and friend for several years before his death. The springboard for Philippa’s enthusiastic approach to her new world was through the abstract forms of music and the philosophies of songwriters and composers.

Technically Philippa’s ability to paint & draw academically, is without a doubt, now concentrating strongly on experimentation and gradually moving from drawing to painting and on to mixed media. A quantum leap in style came about when she began exploring dreams – an ancient philosophy based on the interpretation of dreams as messages. These interpretations have altered the destinies of people and nations throughout history.

Also her miniature portraits – particularly of animals, & conceptual works using a variety of media give an added dimension to her work. Essentially a metaphysical surrealist, Phillipa Stewart-Hall creates works that are not superficial, and she always challenges the viewer to explore her works.

Philippa’s thirst for knowledge has also led her into another arena – that of Botanical Painting. This is an area of art, which she finds wonderfully meditative – that of being one with the plant. This exploration has enabled Philippa to exhibit with the Botanical Art Society of Australia. Her works explore the exquisite detail and minutiae of the beautiful world of botanical art, and feature both flora and associated fauna – in intimate “plant portraits”.

Desert Pea… I love to dance too
card and print 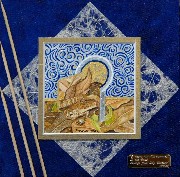 I make my appearance…
print

Magnolia Atlas – & Down Came a Spider
card and print 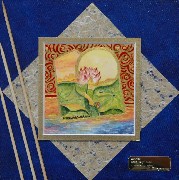